“The Most Unusual Cucumber Shop” was closed, but through the storefront window and lace curtains I could peer into the shadowy interior. Slightly creepy. 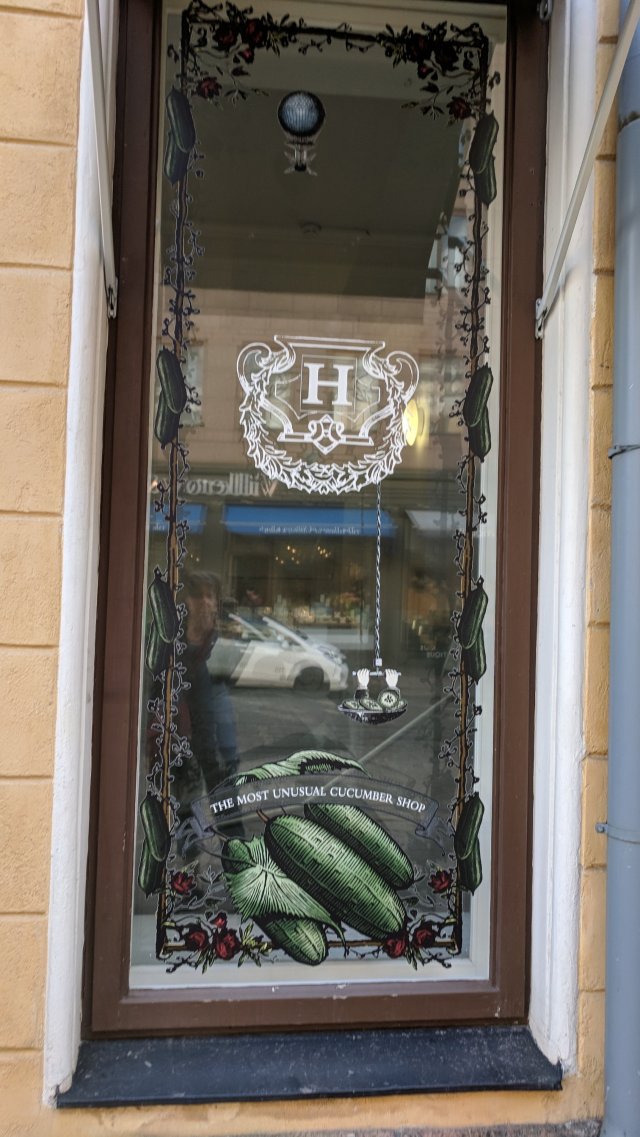 Large specimen jars were poised atop pedestals, and dark forms floated vaguely in the liquid. Slightly sinister. I will never know what lurked in that Helsinki curiosity shop.

A few minutes earlier, I had stepped out of the fishermen’s shop where Ozzy Osbourne’s twin sold me two hand-tied salmon flies for Dan’s birthday gift. But I had to stop at the corner because a military tank was passing on the cobblestone street in front of me. I felt that I’d stepped through the Looking Glass. 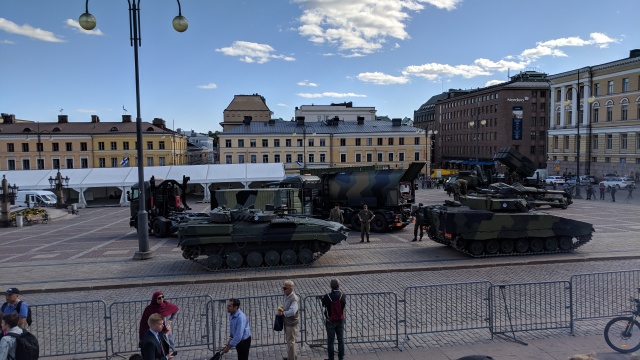 Across the street was Finland’s Senate Square, where a patriotic celebration was winding down. One block left on the cobblestone sidewalk and I was again peering in a shop window, this time at a sleek modern bookstore, displaying titles in both English and an indeterminate Nordic language. People inside were browsing the books and merchandise. I needed a new book. (The book I’d purchased in Moscow, Kazuo Ichiguro’s “The Unconsoled”, was living up to the cryptic reviewer sound bites on the back cover: ‘One of the strangest books in memory.’ I’d selected it because the front cover boasted “Winner of the Nobel Prize in Literature”.)

Once again, I could not get inside a shop. The big, modern door on the corner opened to a small foyer, but it seemed that a key card was needed to enter further. No bottle labeled “drink me” in sight. Eventually I made my way around the corner and to a larger entrance where university students emerged. Inside, the bookshop occupied just a small corner of The ThinkSpace, a meeting place/lecture hall/internet cafe/accelerator. The bookshop’s English-language titles were mostly classics: Dickens, Twain, Hemingway. I selected The Handmaid’s Tale. Years ago, I’d tried and failed to get interested in this book. I really would have preferred something more light-hearted, but in The ThinkSpace I felt compelled to select “serious” literature, just in case anybody was watching (and besides, The Handmaid’s Tale had been made into a movie and a TV series, so it maybe it will hold my attention after all).

The title that had attracted me from the sidewalk was “Goodnight Stories for Rebel Girls”. 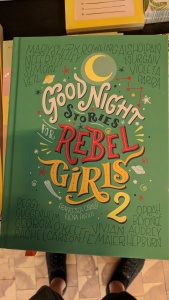 I opened the cover and was delighted to see that it was just what I’d expected: a collection of one page-stories about girls and women who had made positive contributions to science, music, literature, medicine, art and other spheres. I didn’t buy this hardback book, but I did put it on my mental list of books to get.

One rebel girl who came to mind is Sophie von Anhalt-Zerbert, later known as “Catherine The Great”, the Empress of Russia from 1762 to 1796. 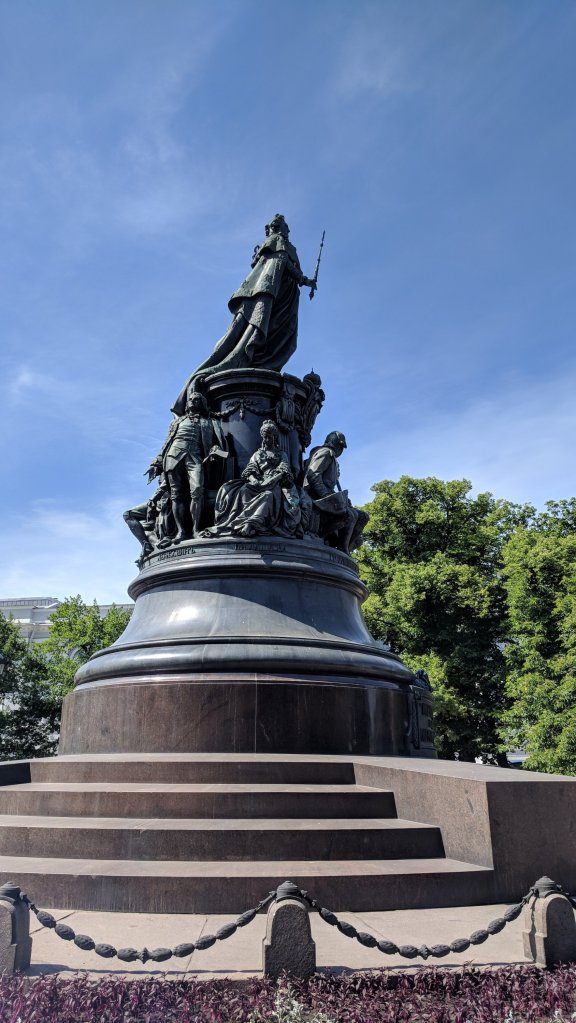 Catherine was a bad-ass. She was a Prussian princess who married into the Romanov family, and was a proponent of the sweeping reforms initiated by Peter the Great. When her stodgy husband inherited the throne he tried to return Russia to old traditions and superstitions, but Catherine could not abide a great step backwards. Her forgettable husband soon died in an ‘accident’ at the hands of Catherine’s lover, and she inherited the throne.

Empress Catherine instituted social reforms, like education for young women and a model for a revised legal system. She sought the counsel of the great thinkers of her day, including Voltaire and Diedrot. She was ambitious militarily, and she expanded her empire. However, her perpetuation of the system of serfdom led to domestic unrest and revolt.

During my stay in St.Peterburg, I enjoyed the company of other intelligent Russian women. Nina was my guide to the city, and all its history and treasures. Her “regular job” is a university professor in the literature department. Her specialty is 17th century English drama. But, I suspect that she could easily qualify as a professor of Russian history. From the moment she picked me up at my hotel, she wove the stories of the Romanov Dynasty with the history of the buildings, monuments, and bridges of the city. 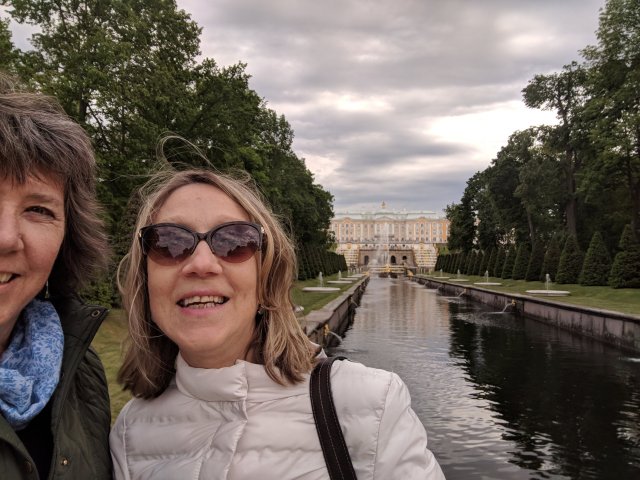 There are not enough superlatives for the city of St. Petersburg, and I can’t hope to describe even a fraction of what I saw. Palace next to palace next to palace. Academies, theatres, cathedrals, conservatories, museums, gardens, canals. Gold, silver, jewels. Heros, artists, scientists, maestros, shipbuilders, ballerinas (and now, futbol stars). 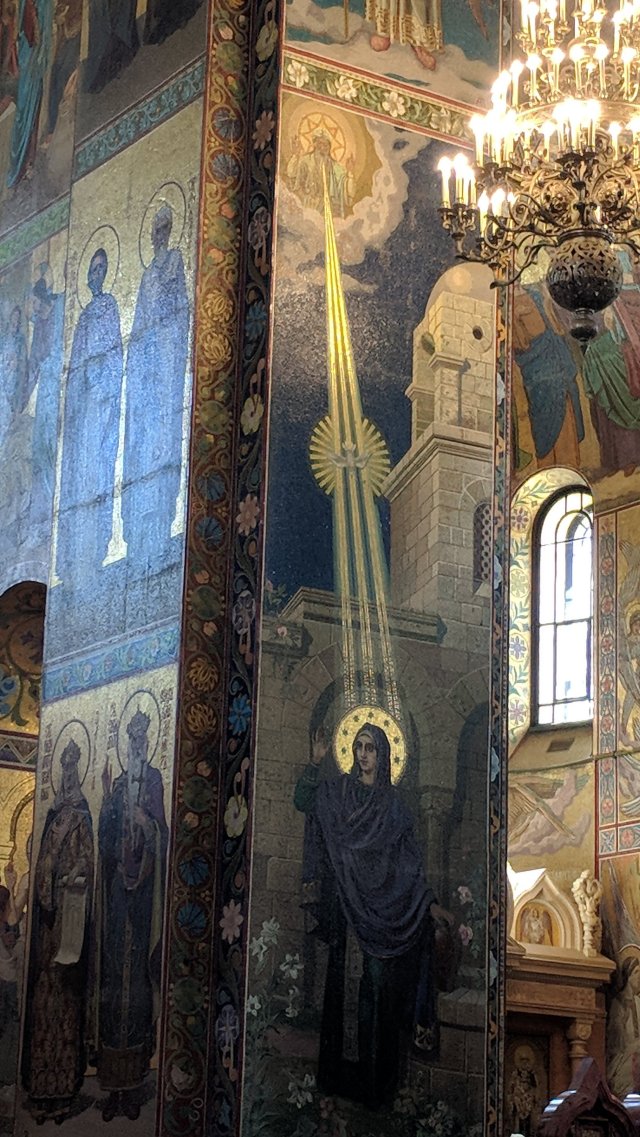 Even my hotel was in a building that was originally a nobleman’s palace. But, it had been repurposed a few times during the past two centuries. The Ministry of Agriculture now occupies one half of the building. The other half was converted to apartments at some time, and a portion of that is now a botique hotel, “Deluxe Hotel”. When I made my reservation, I prioritized location over amenities, and I was just 2 blocks from the important city sites. But, I knew by the bargain price ($100/night) that “Deluxe” was probably a bit of puffery. Luckily, I arrived during daylight. Google Maps directed me to a little alleyway blocked by an old iron gate. The small sign above confirmed that l had arrived at Deluxe Hotel. After stepping through the gate, the only option was a dented metal door. I pressed the button and I was buzzed in by an unseen hand. I had to push hard on the door and it groaned loudly as it reluctantly opened to a dim empty foyer. “Dungeon” was the word that came to mind. Now my only option was up the worn marble stairs. Another locked door. I found the button and was buzzed through, where I was greeted by an accented “hello” from the young front-desk clerk. My room was large and clean, but the window looked out on a dingy yard with a wrecked car. The other hotel guests included foreign tourists and families, and it turned out to be a safe neighborhood with nice restaurants and a park nearby. All in all, it was a safe but medicore hotel in an excellent location and I was glad that I chose it. 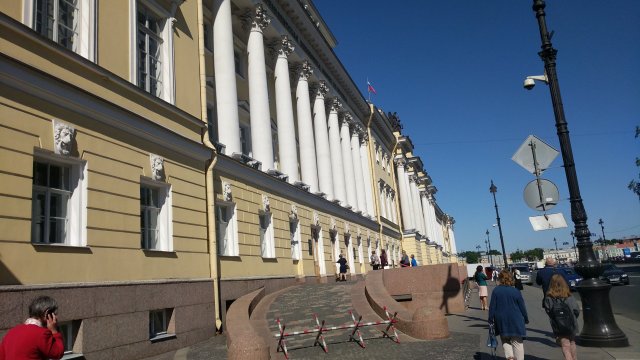 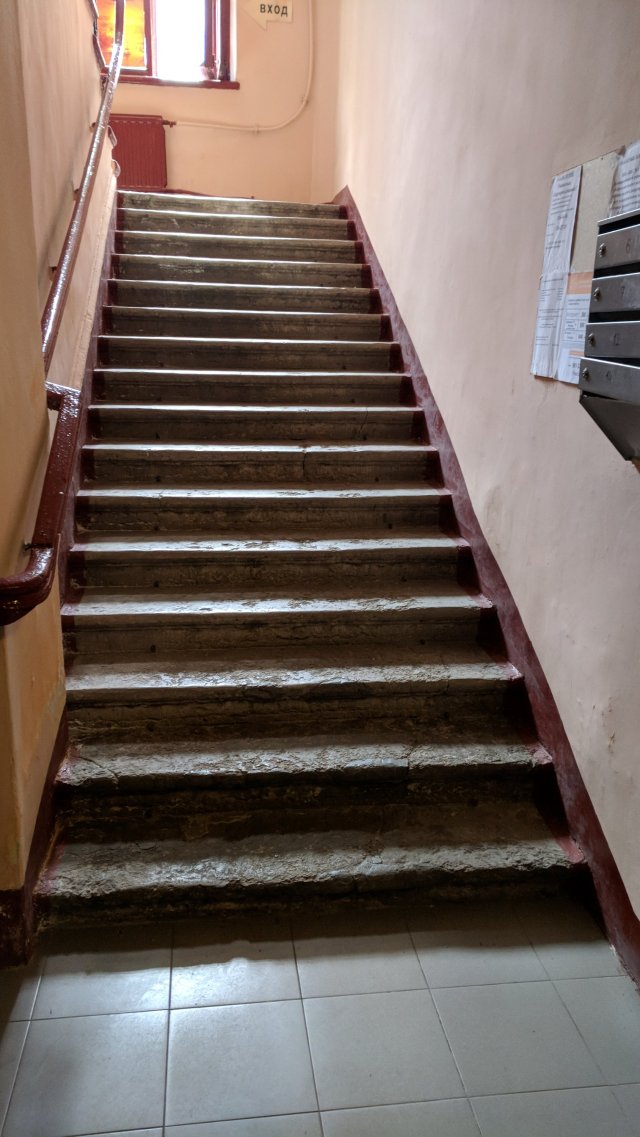 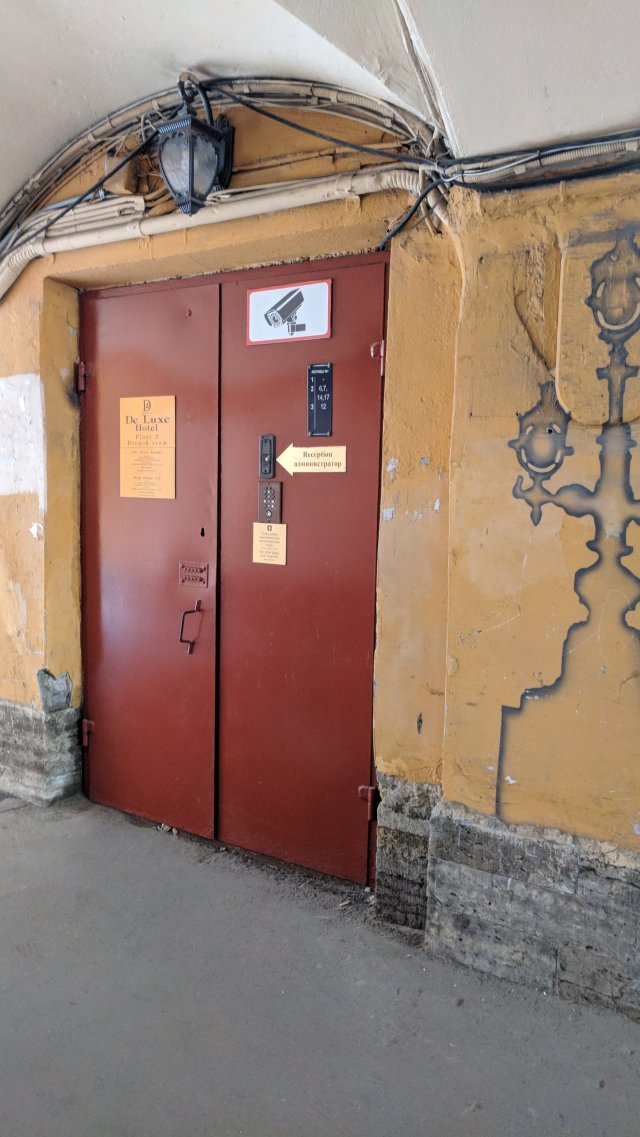 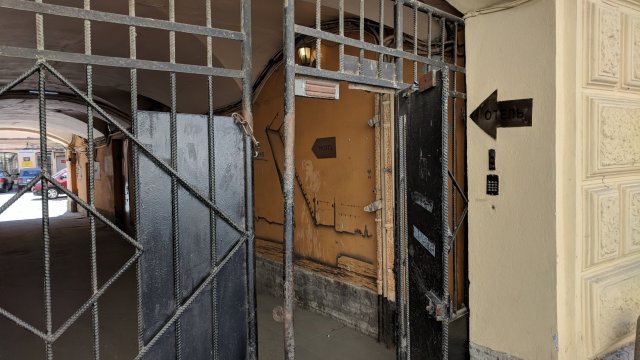 The city was full of tourists, and the main sights were packed with tour groups – busloads from the cruise ships. At the Peter & Paul Fortress, a discreet payment to the guard allowed our car inside the restricted parking area, and ahead of the crowd (“a small corruption” said Nina). Later, out in the countryside at the rear door of the Catherine Summer Palace, the queue to enter wrapped around the building and the line wasn’t moving. 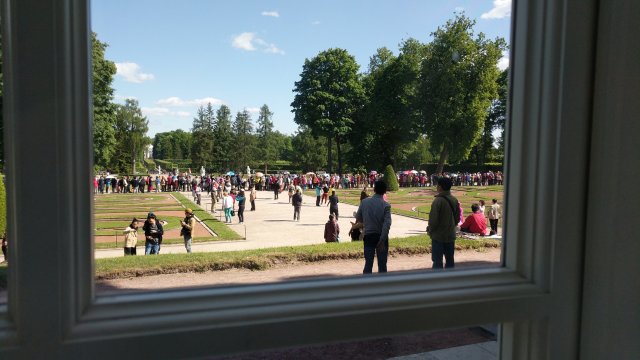 But Nina is a good friend of the director of the Summer Palace. Olga met us at the side and escorted us to the FRONT door of the palace, where we made our exclusive entrance. 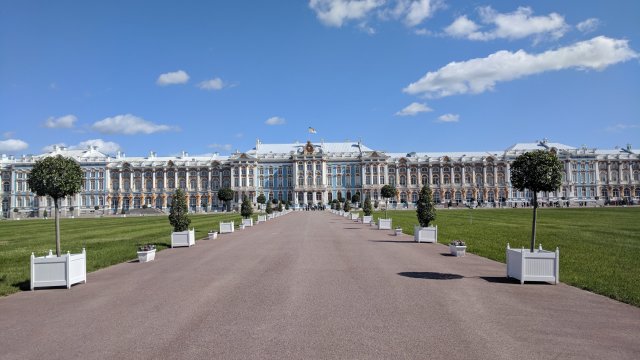 If you’ve ever imagined the interior of a fairy-tale palace, it probably looked like the Catherine Summer Palace. Grand ballrooms with marble and gold. Dining rooms with crystal, china, parquet floors, chandeliers. Paintings. Sculptures. More gold. Nina slipped us through each crowded hall, and staked out the exact spot in each room for best viewing. 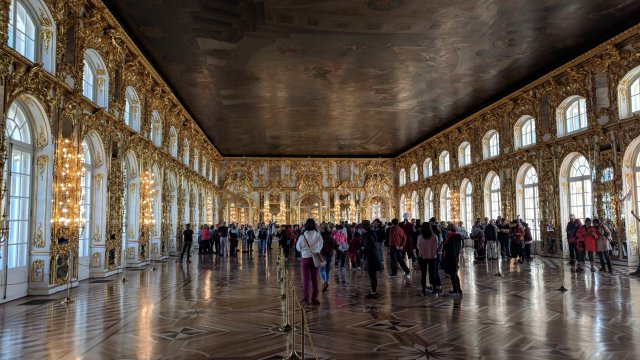 The next morning, we visited the Winter Palace in the heart of St. Petersburg. Catherine the Great had felt that it was too ostentatious for her day-to-day living, so she had a smaller, private quarters added to the side of the palace…her little hermit’s shack. This is now The Hermitage Museum which houses 40,000 pieces of art from masters around the world. 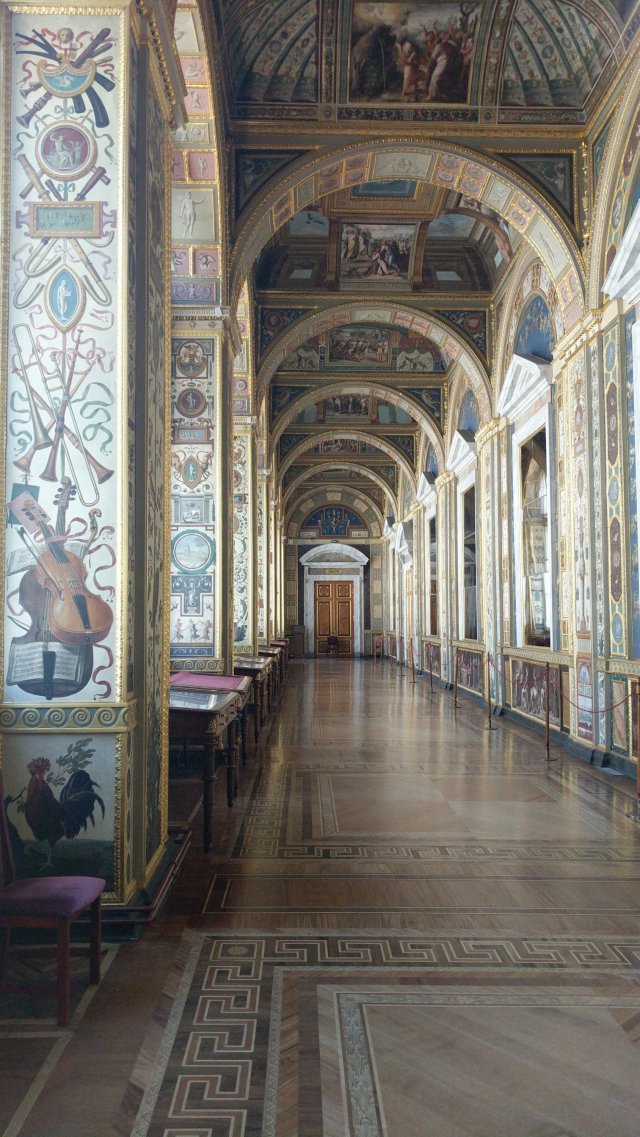 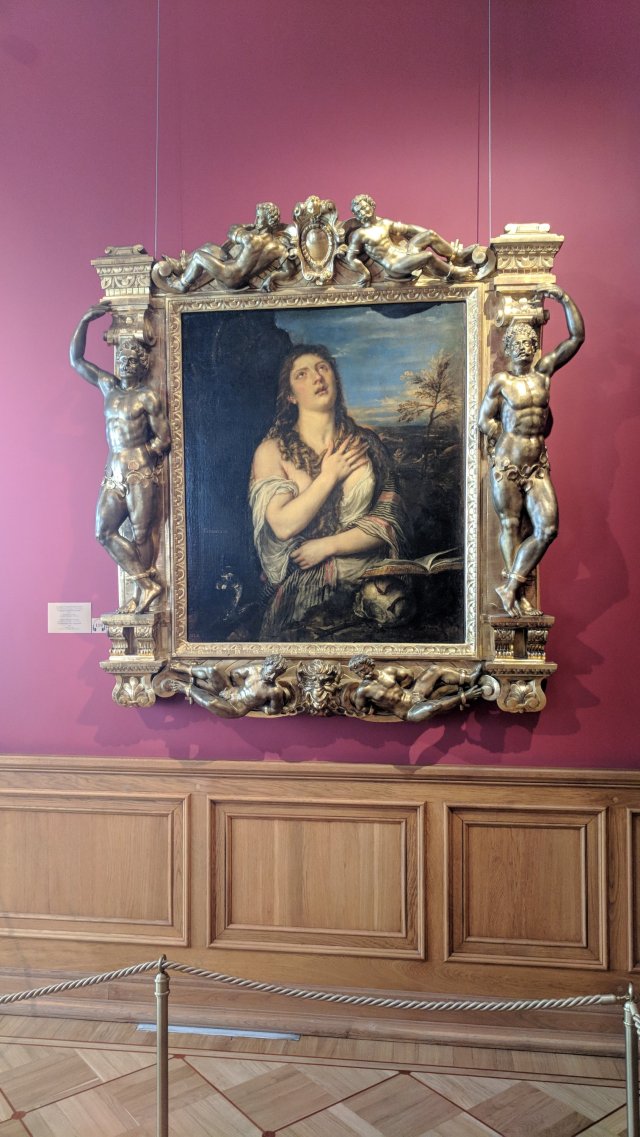 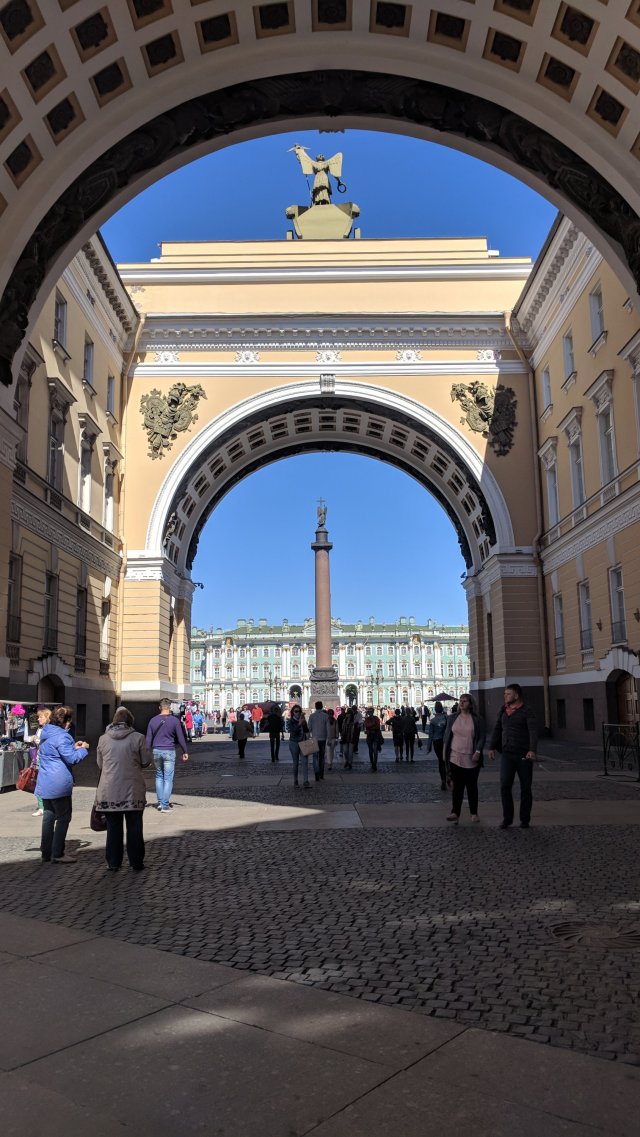 Two generations before Catherine, in 1703, at far north and west edge of Russia, Peter of the Romanovs, founded the city that would become the new capital of Russia. It quickly gained fame as a center of science, art, music and immense wealth. Peter achieved his ambition to build a city as splendid as the capitals of western Europe. We visited his summer palace, now known as Peterhof, where he dazzled foreign heads of state. His science academy attracted the brightest and best. I would read some of their names in my visit to the Nobel Museum in Stockholm, four days later. 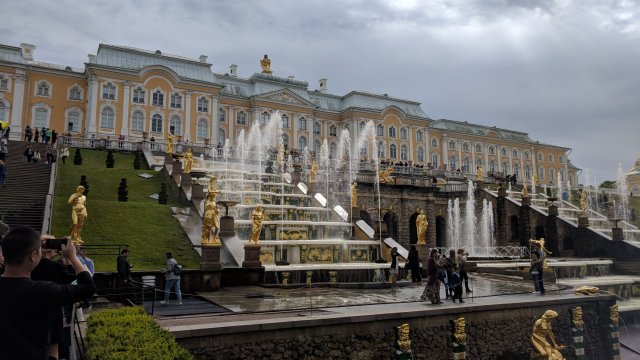 And I enjoyed the company of another brilliant Russian woman on my last night in St. Petersburg. Natasha, a dear friend of my American friend Irena, picked me up in her car from my hotel and we decided to visit the nearby St Isaac Cathedral, but worried about finding a parking space in this crowded city. Natasha’s warm heart brought us good luck and we slipped into an open parking space on the corner next to the Cathedral. This building is the largest Orthodox Church and has the third largest dome in the world. Later that evening, another parking miracle occurred and we found a space right in front of the famous Mariinsky Theatre where Natasha treated me to a performance of the ballet, Tchaikovsky’s Sleeping Beauty. 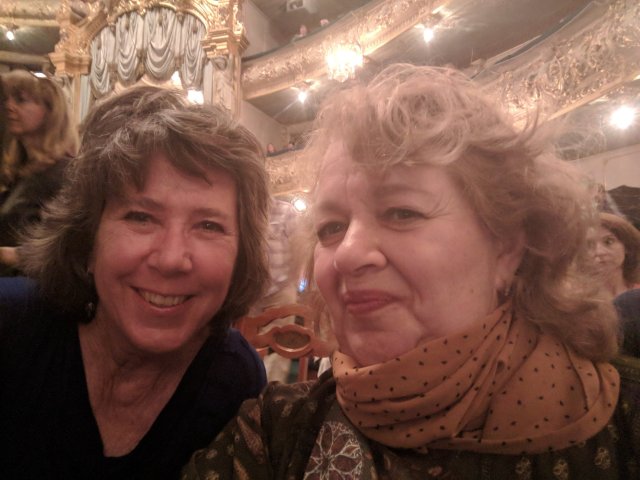 The music, ballet, costumes were extraordinary. And we felt like royalty as we sat in the same theatre that hosted emperors in the past (and Vladamir Putin 2 days prior). Thank you Natasha for an unforgettable night!

The next morning, I hefted my backpack and boarded the train to Helsinki, Finland.

One thought on “Most Unusual Cucumber”

If I Had a Hammer